Both James and Pharaoh's Conclave owners, Erich and Jakita Thomas smashed a sledgehammer into the future center's wall to officially begin constructing the facility.

"I'm so excited that Morris Brown became the first institution in the state of Georgia to start an innovation program in eSports performance and I am excited to partner with Pharaoh's Conclave, said James."

Pharaoh's Conclave connects the eSports community with school systems, park and recreation centers, churches, Boy & Girls Clubs, and AAU teams to engage and prepare young people for careers and opportunities related to the eSports industry. To bring diversity and inclusion to the gaming industry, Pharaoh's Conclave works to create opportunities for minorities in STEM professions.

"The gaming industry is a booming industry. It's a $150 billion [per year] industry," said Jakita. And interest in gaming crosses racial divides. Jakita says Black and Brown youth consume games at a 73 percent rate.

But there is a major discrepancy in the industry. Jakita continues, "Black and Brown people make up less than five percent of the workforce that's building those games. So there's a real disparity there."

"There are thousands, hundreds of thousands of jobs that go unclaimed by people who are not prepared to take them," said Erich, " and so what we're gonna do with the vision of Dr. James is to prepare those young people not just at the college level, but we're pipeline cradle to career."

As a way to target 11th and 12th graders, James wants to start a dual enrollment program where "they will have 24 hours of collegiate credit that they can transfer to another school or come straight to Morris Brown and finish their bachelor's degree." 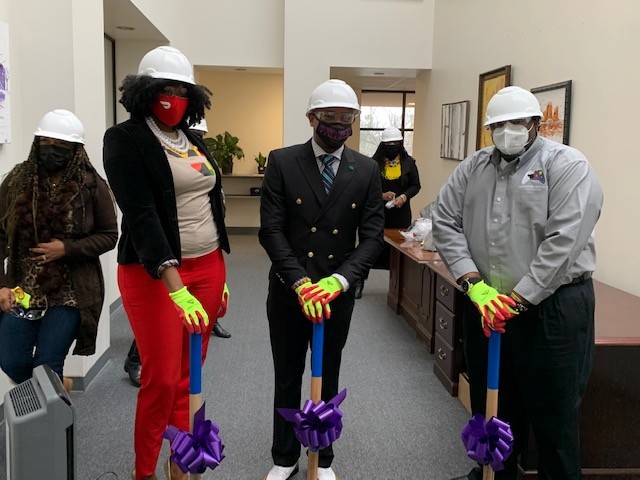 In conjunction with Google, The Arthur M. Blank Foundation, and DoorDash gave donations to Pharaoh's Conclave and the Thomas Family Fund and then paid it forward by giving $160,000 to Morris Brown to start the program and build the innovation center.

The center, named after Morris Brown alumna Ronald Floyd Thomas, Erich's father and Jakita's father-in-law, who passed away in 2013.

"He continues to lead the way, even posthumously," said Erich. Ronald graduated from Morris Brown in 2002.

In addition to announcing the center, James mentioned that the decision for accreditation from the Transnational Association of Christian Colleges and Schools (TRACS) will happen in mid April.

"So we anticipate good reviews out of that," said James. He adds, "once we start promoting this program, we expect a huge influx of students coming in to get either a certificate or a bachelor's degree in eSports."

Construction will begin immediately and will be complete before starting the fall semester, where classes begin in early August.

If you are interested in applying for a degree in eSports, check out the school's ​admission page​ on Morris Brown's website."

No tags has been created yet

Get in the Game!

Sign up today for one of our innovative programs for elementary, middle & high school students

Sign Up
Youth eSports LeagueSign Up
LVL Up Academy

Sign up for updates on what's happening around the PCX community.

This email address is being protected from spambots. You need JavaScript enabled to view it.